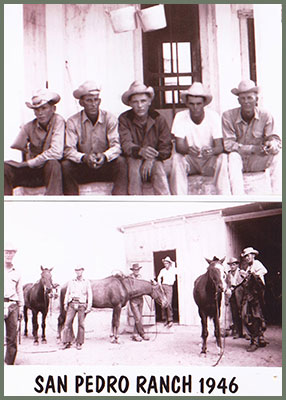 The San Pedro Ranch was originally a part of an 1812 Spanish Land Grant. Only two other individuals had held title to the property before Hugh Fitzsimons Sr., a pioneer in oilfield exploration, purchased the ranch in 1932. Thereafter, he replaced the remaining wild Mexican steers and mustangs with a herd of purebred Hereford cattle. Always interested in the most forward thinking management techniques, Mr. Fitzsimons’ son, Hugh Jr., began operating the ranch holistically in 1975. Hugh Jr. realized that utilizing the synergy of the water cycle, plant communities, and planned grazing leads to a healthier ecosystem, which in turn supported healthier livestock and wildlife. Current owners Joseph Fitzsimons and his sister, Pamela Fitzsimons Howard, continue that practice today. As Joseph attests, “My father recognized that over the long term we were in the resource and habitat business; cattle and wildlife are some of the crops. We have an integrated approach to livestock and wildlife management. Our philosophy is that if we work to maximize native habitat in an ecological approach, then the livestock and wildlife will benefit.

The San Pedro Ranch represents a unique confluence of resources: geologic, riparian, biologic, herbaceous, and cultural. The property sits on the southern edge of the Tamaulipan and Chihuahuan biotic Provinces on top of an ancient sea bed, covered with 5 different soil orders, 36 different plant communities, (many of which are transitional species) and inhabited over time by 4 distinct cultural groups. It is in the flight corridor of many migrating birds and butterflies. Because of careful attention to environmental conservation, wildlife on the San Pedro Ranch abounds with dove, quail, white-tailed deer, turkey, and other rare species such as the Texas tortoise and the Texas horned lizard. Everything depends on a healthy, diversified ecosystem, which in turn depends upon sustainable management practices.